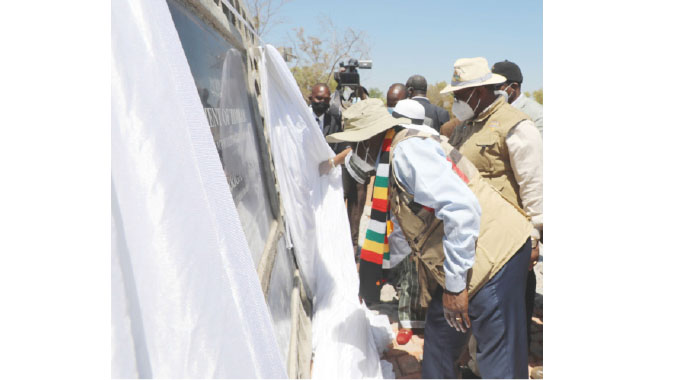 Vusumuzi Dube in Lupane
PRESIDENT Mnangagwa yesterday showed that he is a listening leader in touch with the people when he travelled by road from Bulawayo to Lupane and also returned by road in order to have a personal feel of the needs of communities and assess developmental work being carried out by government.

The President is usually flown but this time around is said to have insisted that he would rather travel the 352 kilometre stretch to Lupane and back by road so as to gain a personal appreciation of the needs of the community.

He was going to officiate at the commissioning of the Lupane water supply station and Bubi-Lupane Irrigation Scheme acceleration model.

This comes as the President has also given the green light for the Ministry of Lands, Agriculture, Fisheries, Water and Rural Resettlement to  include rural development in its portfolio, as the Government ups it rural development thrust.

Addressing delegates at the commissioning, President Mnangagwa revealed that the name change, which is the second time this year after Fisheries were also included in January, was after a special request from the responsible Minister, Dr Anxious Masuka.

“As I recognise Minister Masuka, I must say that he has requested that we add rural development to his portfolio of which I have agreed. I must point out that this is the first time in all my years in Government that a minister has actually come to me and requested a name change,” said President Mnangagwa.

Part of the wheat crop at the Lupane Irrigation Scheme

The President said rural development would remain at the core of the Second Republic’s thrust noting that it was now up to everyone to play a role in that regard.

“No one but ourselves will build our communities and our country. True empowerment and sustainable development will only be realised through greater participation of communities, especially women and youth in National development projects and programmes. As Zimbabweans, we are a hardworking and productive people. We will never be mere objects of charity. As the Second Republic, we will, thus continue to prudently use domestic resources to propel a development agenda which leaves no one, and no place behind, for the good of our people,” said the President.

He said under the Second Republic, the holistic completion of development projects was key to spurring production, productivity and profitability across all sectors of the economy. Speaking on the President’s insistence on travelling by road to assess the needs of the Matabeleland North province and progress on major developmental projects, Vice-President, Dr Constantino Chiwenga, who is also the Minister of Health and Child Care said this was testament of his commitment towards all projects under the Second Republic.

“Today, the guest of honour having travelled by road all the way from Bulawayo, he did not fly, he said; ‘I want to see the problems affecting people in Matabeleland North from their roads right up to their projects’. So he travelled here by road, trying to pick up all the issues and so he has now arrived to launch the Agriculture Rural Authority Vision 2030 accelerator model programme,” said Vice-President Chiwenga.

In his address, Minister Masuka said his ministry was now engrossed with rural development and would ensure that most projects that they embark on will have a bearing towards the country’s endeavour of Vision 2030.

“Your vision for this country to become a prosperous and empowered upper-middle class economy by 2030 is gaining the much needed traction every day. Your Excellency, under your guidance the Bubi-Lupane Dam is no longer the project. We used to build a dam, commission and celebrate but now the dam is now part of the broader projects and not the project. The project is rural development for the attainment of Vision 2030 and in the agricultural space, the components are dam construction, irrigation development, electricity generation, provision of drinking water and fisheries development, the Bubi-Lupane Dam has now achieved the two of the five aspects,” said Dr Masuka.

“The ministry is also accelerating parastatal reforms. Zinwa currently provides water to towns, cities, growth points and rural service centres but has never ventured into providing water for our villages, this left 70 percent of our population vulnerable.

“Zinwa now has an expanded mandate and 40 drilling rigs are going to be purchased for Zinwa so that they can provide water to the 35  000 villages we have in the country, all the 9 600 schools and an additional 3 600 youth centres in various wards,” he said.

Dr Masuka said Zinwa will also deal with irrigation conveyance working together with the Agricultural and Rural Development Authority (ARDA) to accelerate rural development which must cause rural industrialisation.