In 1981 the role of 5th Brigade was already under scrutiny. 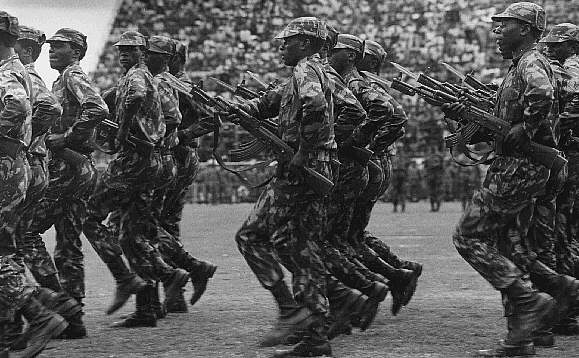 according to some sources the role of the North Korean trained 5th brigade was already under scrutiny with the Gvt failing to clearly explain how the brigade would function along the regular army.

Quote “The future role of the North Korean-trained Brigade of the Zimbabwe National Army is not entirely clear, but at this stage it seems an exaggeration to say it will act as an internal police force without normal police restraints. There are five Brigades in the Zimbabwe National Army and one of these is currently being trained by North Korean advisers under an agreement due to expire in May this year. Early reports on the intended role of the Fifth Brigade quoted Mr Mugabe as saying it would be a special unit to be sent to trouble spots in Zimbabwe. Subsequent reports however, suggested that the Brigade was likely to remain a normal part of the Zimbabwe National Army, to be used within Zimbabwe’s borders for defensive purposes only. Mr Mugabe said in answer to a question in Parliament on 15 September 1981 that the main reason North Korean military instructors were in Zimbabwe was to train Zimbabwean troops in the use of arms provided by North Korea.

One thought on “In 1981 the role of 5th Brigade was already under scrutiny.”