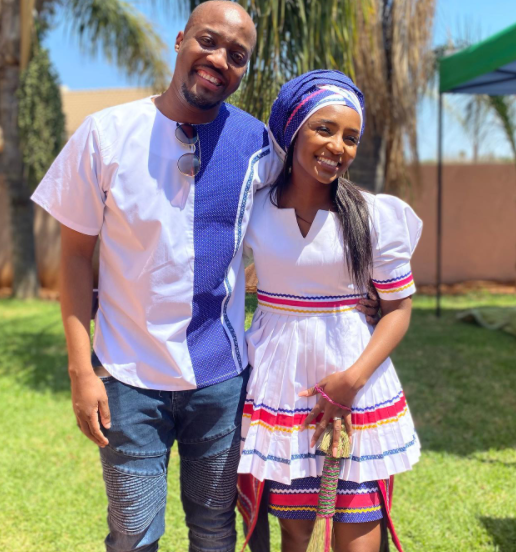 Skeem Saam actress Nozi Langa just got married to her fiancé of four months, Boipelo Molao. The actress who plays the role of Glenda Mogotsi on the show just announced she is now Mrs Molao after getting engaged in May of this year.

Her husband also took to his Instagram account to post pictures of their traditional wedding. Mrs Molao shared their wedding pictures on her Instagram stories today after getting hitched yesterday in Bendor, Limpopo province.

See all their wedding pictures here:

It is unclear when the couple started dating as the actress is private about her love life. There are no pictures on the internet about their relationship prior to their wedding pictures that the couple posted today.

According to LinkedIn, her husband Boipelo Molao is a senior brand manager at Amstel.

Congratulatory messages from their family, industry friends such as Minnie Dlamini and Langa’s co-stars have been pouring in for the actress and Molao.

Sources have revealed that Molalo popped the question in May.

The actress confirmed her lobola was paid in May after she took to her Instagram earlier this year (May 2021) to announce that she is married.

She posted a picture of herself with a ring on her finger with the caption “His Wife”.

Other Skeem Saam actors that are married

Actress Innocent Sadiki who plays the role of Sthoko Seakamela has been married to her pastor husband, Phendulo for 10 years.

Clement Maosa, who plays the role of Kwaito Seakamela popped the question to his long-term girfriend and baby mama Kemo on his 30th birthday in 2018.

Cornet Mamabolo who plays the role of Thabo Maputla and just took a break from the soapie also got married to the mother of his child in 2019.

Actress and mother of two daughters Pebetsi Matlaila, who plays the role of Mokgadi Matloga also tied the knot in November 2020.