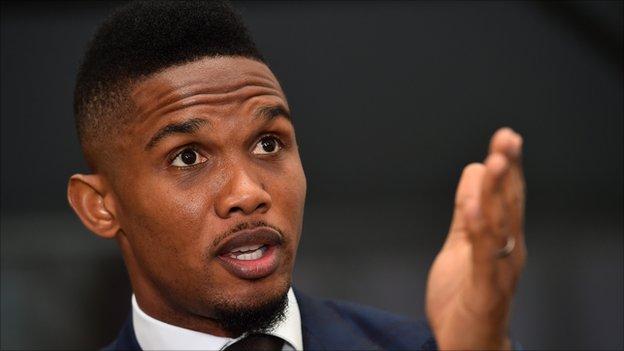 Former Cameroon international Samuel Eto’o is to stand as a candidate in the race for the presidency of his country’s football federation (Fecafoot).

The former Barcelona and Inter Milan star made the announcement on his social media pages on Tuesday evening, saying he had taken the decision “out of love for Cameroon and passion for our football.”

“Time is running out. Waiting is not an option. It is time to rebuild our football,” Eto’o said.

The delayed Fecafoot elections are expected to take place on 11 December, with the Africa Cup of Nations set to start in Cameroon on 9 January.

Fecafoot has not announced when it will release the final list of eligible candidates who can run for the presidency.

Eto’o, 40, had an illustrious playing career, winning domestic and European titles in both Spain and Italy.

The four-time African player of the year is his country’s record scorer with 56 goals in 118 games and also enjoyed brief stints in the English Premier League with Chelsea and Everton, ending his playing career in Qatar.

At international level, he helped Cameroon win the Africa Cup of Nations in 2000 and 2002 and was a gold medallist at the Sydney 2000 Olympic Games.

The announcement by Eto’o comes amid controversy in Cameroon after candidates with dual nationality had been told they could not stand in the elections. Eto’o was granted dual Spanish nationality during his time at Barcelona.

So far, Eto’o is the third former Indomitable Lion to run as president of Cameroon’s football federation.

Jules Denis Onana and Emmanuel Maboang Kessack, who both played in the 1990 World Cup for Cameroon, are also standing – as is the interim president Seidou Mbombo Njoya along with football agent Ivo Chi.

Candidates have until 11 October to declare their intention to run. – bbc.com